Tasman Echo Alpha is an former Air New Zealand's pilot's imaginary recollections of aviation's glorious days when pilots flew with navigators and flight engineers, and passengers dressed up to fly in those 'magic flying machines.'
Characters include Richard Whacker, the aircrew scheduler who managed to get the aircraft overseas and their crews in New Zealand, the philandering captain who didn't tell his wife he'd retired, and a band of very professional aircrew who always performed brilliantly when the chips were down. 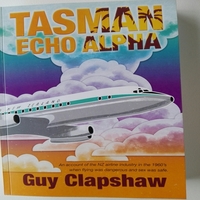 An account of the NZ airline industry in the 1960's when flying was dangerous and sex was safe. By Guy Clapshaw
Paperback
Price:
NZ$ 35.00